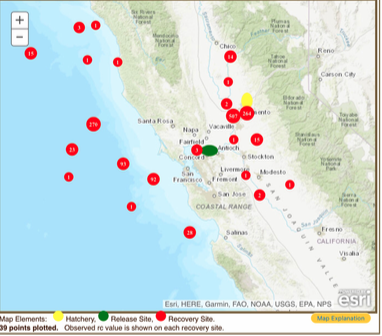 This story relates to two common practices at state and federal salmon hatcheries in the Central Valley – releasing about half their 30 million hatchery salmon smolts at or near their production hatchery versus trucking the smolts to the Bay.  Choosing one practice over the other is a controversial subject that has received a lot of attention over the past two decades.  Rather than get into the weeds of the controversy and explain the various arguments, I will just lay out what occurred with two American River release groups after their release in May 2018 and return as adults in 2020.  Release group #061465 was 669,000 fall run smolts (3-4 inches long) that were transported 20 miles downstream from the American River (Nimbus) Hatchery and released into the mouth of the American River under the Jibboom Street Bridge.  Release group #061467 was 650,000 fall run smolts transported approximately 100 miles downstream to net pens at the Wickland Oil Terminal for release into eastern San Pablo Bay about 20 miles from the Golden Gate Bridge and the Pacific Ocean.  The estimated %survival based on tag recoveries was 0.04% for group #061465 and 2.20% for group #061467.  The returns by locations are shown in Figures 1 and 2.  These results are more common than not.

By Tom Cannon / on behalf of NCGASA.org / 2022 The NCGASA Board of Directors hired Tom Cannon in the … END_OF_DOCUMENT_TOKEN_TO_BE_REPLACED