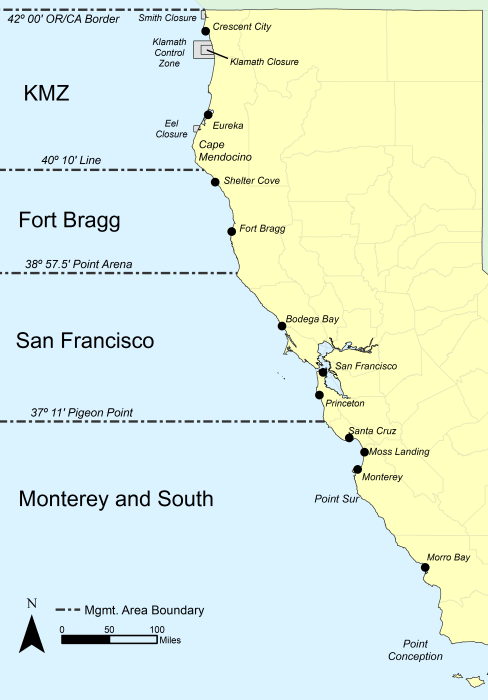 The number of adult fall-run Chinook salmon forecast to be swimming off the coast of California seems to be trending upward from last year. That was the good news delivered on March 2nd, 2022’s annual Ocean Salmon Information meeting hosted by the California Department of Fish and Wildlife.

The number of Sacramento River fall-run Chinook salmon predicted in the ocean this season is 396,458 compared to 271,000 last year, a 45-percent increase. This year’s ocean abundance for the Klamath River also came in above the 2021 forecast, with 200,100 adult fall Chinook salmon predicted to be in the ocean. Although an improvement, it’s still well below the stock’s historical levels.

Even with an increase in ocean abundance, both commercial and recreational anglers will likely face tougher restrictions this year to protect the Klamath stocks. One of the main reasons behind the restrictions is the harvest rate of 4-year-old Klamath fall Chinook. The harvest rate is currently set at a maximum of 16 percent. In 2021, the harvest rate shot up to 27 percent, mainly due to the Klamath salmon intermixing with the Sacramento fall run in the San Francisco Bay region, where the baitfish were plentiful. This concentration of both stocks also made them vulnerable to sport and commercial anglers.

The Klamath, where the fall-run Chinook were declared overfished in 2018, is also lagging in adults and jacks returning to the river. In 2021, 64,591 adults returned, which is just 54 percent of the historical average. In addition, the two-year-olds or jacks, were also well short of long-term averages. Last year 10,384 returned, 60 percent of average. These low returns have led to years of missed natural escapement numbers. In 2021, the natural escapement objective was 31,574 but just 30,196 were counted. The geometric mean of adult natural escapement for the past three years is 25,111, which is well short of the minimum floor escapement of 40,700. A whopping 85,251 natural area spawners are necessary in 2022 for the stock to be considered rebuilt.

What the PFMC chooses to do with these numbers will be determined in the next couple of months. The PFMC met with sub panels and advisory boards March 8 through March 14 in San Jose to determine whether any in-season actions are required for fisheries scheduled to open prior to May 16. They also crafted three regulatory alternatives for ocean salmon fisheries in effect on or after May 16. Final adoption of alternatives for public review is tentatively scheduled for March 14. To view the salmon preseason meeting process, visit www.wildlife.ca.gov/Fishing/Ocean/Regulations/Salmon/preseason.


The California ocean salmon season models are now set from the Pacific Fisheries Management Council or PFMC council meetings from San Jose. The salmon technical team, the salmon advisory panel and some CA Dept., of Fish & Wildlife or CDFW staff have been meeting for eight days reviewing the compiled 2021 ocean salmon data.

NCGASA president James Stone has been attending the meetings and has been working 12-14 hours a day helping shape the ocean salmon seasons as well as trying to balance everyone’s fishing opportunities in the four Northern California recreational zones (S.F., Monterey & South, Fort Bragg and the Klamath (KMZ).

The salmon advisory sub panel is comprised of four seats appointed by the state to represent the public. The two sportsmen reps are James Stone from NCGASA and Jim Yarnell from Calif Sport Fisheries out of Eureka. John Atkinson out of Sausalito representing the Calif charter boat fleet and Golden Gate Fishermen’s Association. George Bradshaw out of Crescent City represents the commercial troll fleet. These four advisors advocate for the best fishing opportunities based on the previous year’s data.

Season Models — also considered bookends as they can be blended together

There will be a public hearing on the three alternatives on March 22nd in Eureka at the Red Lion Hotel at 7pm. This is an opportunity to voice your opinion on the option you prefer. If you don’t wish to attend in person you are encouraged to submit a letter to the PFMC stating your preference.

The final dates for each zone will be decided during the April 6th through 13th  PFMC meeting in Seattle. Click meeting schedule below to read.

Dates that were decided on:

By Tom Cannon / on behalf of NCGASA.org / 2022 The NCGASA Board of Directors hired Tom Cannon in the … END_OF_DOCUMENT_TOKEN_TO_BE_REPLACED