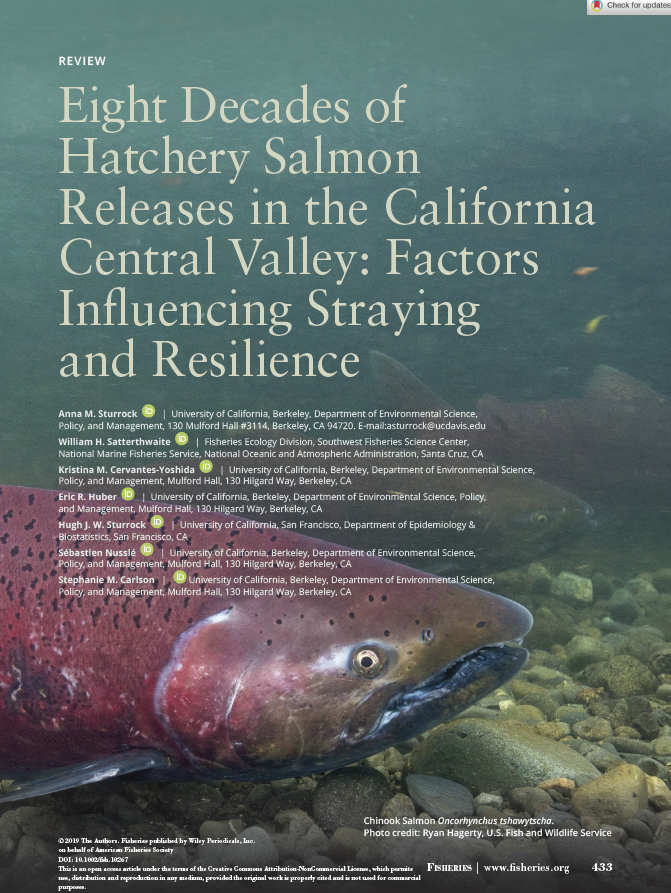 Fall-run hatcheries in the CCV have developed an extensive trucking program to reduce mortality during outmigration through an increasingly degraded system (Huber and Carlson 2015). While off-site releases also occur in other systems (e.g., Colombia River barging; Bond et al. 2017), CCV hatcheries often eliminate the entire migratory corridor by trucking smolts directly to the bay (specifically, the region between Chipps Island and Golden Gate Bridge, hereafter referred to as bay; Figure 1). An inadvertent consequence of trucking has been excessive straying rates (California HSRG 2012), implicated in the genetic homogenization of CCV stocks (Williamson and May 2005) and increasingly synchronized population dynamics (Satterthwaite and Carlson 2015). Despite the effects of increased straying, the influence of hatchery release strategies and environmental factors on straying behavior remains poorly understood in the CCV. Past synthesis efforts were hampered by inconsistent marking rates and recovery efforts, inaccurate or inaccessible release records, and release patterns designed to maximize abundance rather than test hypotheses. The only systematic experiment in the CCV investigating the effect of transport distance on straying rate revealed a strong positive relationship between the two (Niemela 1996), but other covariates or populations were not examined.

In this paper, we (1) summarize hatchery release information, (2) document historical trends, and (3) quantify population responses (e.g. straying) to differing management actions and environmental conditions to understand the extent to which changing hatchery management practices may affect stock dynamics in a variable and changing climate. Specifically, we examine clustering of release sites across the landscape, and contraction of ocean arrival timings as a function of release date and location, given potential influence on the buffering capacity of the hatchery stock. For example, if all fish were released in a single location impacted by a toxic spill, the entire cohort could perish. The effect would be amplified if the release period were short and coincidental with peak toxicity. We also model straying rates of hatchery fish to assess the importance of release strategy (e.g., transport distance and timing), environmental conditions, and demographic factors on homing behavior, as elevated straying could homogenize the stock and reduce its adaptability. We conclude by synthesizing our results with other related studies, and discuss their implications for stock resilience in a changing climate.

By Tom Cannon / on behalf of NCGASA.org / 2022 The NCGASA Board of Directors hired Tom Cannon in the … END_OF_DOCUMENT_TOKEN_TO_BE_REPLACED