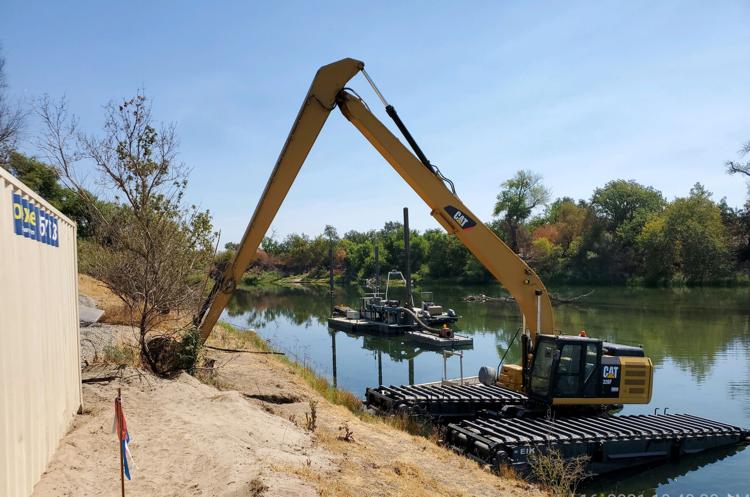 Photo Caption:  An amphibious excavator is positioned near the confluence of the Yuba River and Feather River ahead of a dredging project being overseen by the Sutter Butte Flood Control Agency.

Bessette said the Yuba City ramp will be open for the public between July 2 and July 18.

“The SBFCA team applied for a $5 million grant through the California Department of Fish and Wildlife in February,” Bessette said. “This grant, if awarded, would provide additional funding to supplement the work currently planned at the Yuba City site.”

The Yuba City boat ramp is located along the Feather River at the confluence with the Yuba River. The project will remove approximately 65,000 cubic yards of accumulated deposits and sand, soil, and gravel that reduces channel capacity and limits access to the river, according to SBFCA.

The Oroville Dam Spillway incident of 2017 has exacerbated sediment buildup in the river, SBFCA said. The agency worked with the nonprofit Nor-Cal Guides and Sportsmen’s Association to obtain funding for this summer’s projects and for future projects.

Nor-Cal Guides and Sportsmen’s Association (www.ncgasa.org) is a local organization that works to improve fisheries in the region, according to President James Stone.

“Our rivers are so full of sediment right now,” Stone said.

Stone said the Oroville incident in 2017 and general waterways mismanagement have been major contributors to the sediment level increasing in the Yuba and Feather rivers. He said it’s been over a year since people have been able to access the rivers from Yuba City or Marysville boat ramps.

“No one can go on the river in those areas … it is so clogged with sediment. There needs to be a massive clean up of this sediment,” Stone said.

He said sediment and debris from the Yuba River ends up in the Feather River.

Yuba Water Agency Communications Manager DeDe Cordell said sediment has been a significant issue in the Yuba River watershed since the days of hydraulic mining during the Gold Rush.

The discharge of an estimated 684 million cubic yards of gravel and debris from hydraulic mining into the Yuba River system has continued to impact the river and fish habitat, according to Cordell.

Chuck Smith, Sutter County public information officer, said the county maintains three boat ramps on the Feather River and one on the Sacramento River. Sediment has been dredged from the ramps in the past but it is a continuous issue. Sediment removal projects require permitting from the state and federal government, Smith said.

He said the county supports efforts to obtain funding to remove sediment and make the navigability of the area’s waterways better for residents.

“The commercial fishing industry and recreational industry is all very important to the economy,” Smith said.

Work began Friday to remove nearly 66,000 cubic yards of sediment situated at the confluence of the Yuba and Feather rivers and Yuba City boat ramp.

The project, which covers an area of approximately 14 acres, is being overseen by the Sutter Butte Flood Control Agency and carried out by Dixon Marine Services, Inc. Permits were issued for the project by the U.S. Army Corps of Engineers on Thursday, and work must be completed by mid-October.

By Tom Cannon / on behalf of NCGASA.org / 2022 The NCGASA Board of Directors hired Tom Cannon in the … END_OF_DOCUMENT_TOKEN_TO_BE_REPLACED